will i find it? 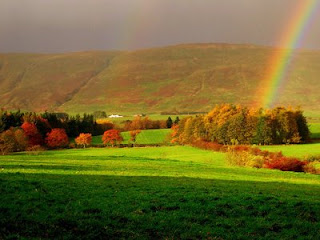 rain was falling on and on, but after all, i never had a chance to enjoy the rainbow.
i was wondering why.
was it involved by my growing up?
i mean, it was so easy to see the rainbow then, when i was little girl.
i came outside after hard rain, and here is it.. popped up in blue sky, charm rainbow appeared.
hide beautifully, like saying hi to everyone, and smiling to me.
was i imagining it? was it real or such a kind of kiddie's dream? did i see the real rainbow?

remember, once had said, "after every storm, a rainbow appears",
i believe it.
i did believe it.

no idea..but now i just don't believe there'll always be rainbow after every hard storms.


wow,,,i don't believe, after all blah blah about storm and rainbow, went outside, and found darkness. yap, there'll be big storm. lighting, thunder everywhere ( have i mentioned that i hate it?)
guess, can i see rainbow after it?
thought by dela